I am the LORD, who brought you out of Ur of the Chaldeans to give you this land to take possession of it.” – Genesis 15:7

This is my third post from Genesis 15 on the Abrahamic Covenant. You may read the first two posts here: The Word of the Lord; God Renews His Promise to Abram.

This post covers Genesis 15:7-11. You may read it here: Bible Gateway.

God renews His promise to give Abram the land, (Part 1).

Unlike us, Abram didn’t have access to a Bible for guidance. We know that Abram believed God’s words (Gen. 15:6). So Abram’s questions were more of an inquiry, seeking confirmation of details and assurance, rather than an expression of doubt:

O Sovereign LORD, how can I know that I will gain possession of it [the land of Canaan]?” – vs. 8

God tells Abram to bring: a heifer, a goat and a ram, (each three years old), along with a dove and a young pigeon.

Animal sacrifices in the Old Testament sound strange. But when Abram practiced God’s instructions, he knew that sin’s curse could only be removed by sacrifice in the shedding of blood.

Layman’s Bible Commentary notes: “The sacrifice that God instructs Abram to make involves the same ceremonially clean animals that are used later in the sacrificial system under the Law of Moses. The use of five different kinds of sacrificial animals underlines the solemnity of the occasion. The text implies that Abram is familiar with the ritual to take place, because God does not explicitly state what to do with the animals; he also sacrifices them and lays them out as an offering (15:9-10).”

In His perfect timing, God would connect the sacrifice with His promise. When God finally responded, (which we will explore next week), Abram could only observe in an unforgettable, sensory enriched ceremony (vs. 12-21).

But after Abram prepared his sacrifice, God was silent.

In the meanwhile, birds of prey swooped down on the carcasses. But Abram held his ground and successfully drove them away.

Why Did God Wait to Respond? 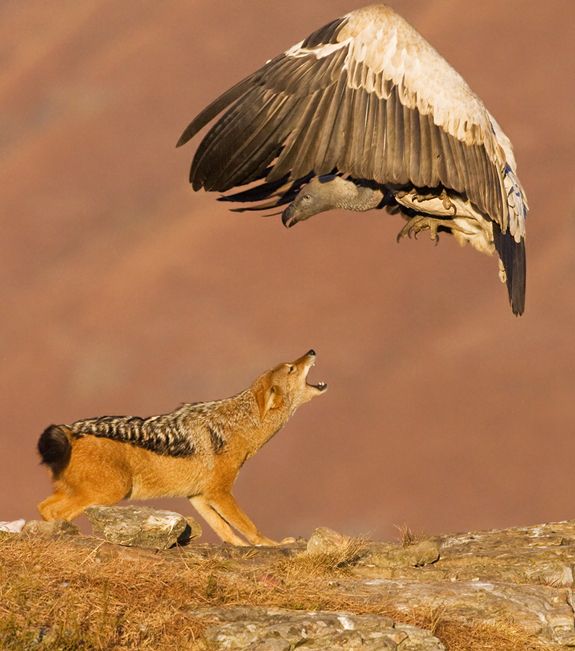 (Picture Source: bklynmed.tumbler.com) Henry Morris suggests: “The delay possibly symbolized the fact that, although God’s covenant would be sure, its accomplishment would take a long time. . . . This experience [having to drive off the birds of prey] no doubt symbolized the attempts of Satan to thwart the plans of God, plus the need for alertness in the believer in order that the enemy not succeed.”

When you find yourself waiting on God, keep praying and hold tight to His promises (Eph. 6). Our all-knowing God will act in His perfect timing.

After God promises Abram that He will be his shield and very great reward (Gen. 15:1), Abram voices his concern:

O Sovereign LORD, what can you give me since I remain childless and the one who will inherit my estate is Eliezer of Damascus? . . . .You have given me no children; so a servant in my household will be my heir,” (Gen. 15:2-3).

The custom in that day held that if Abram died without a son, his oldest servant would become his heir. Even though Abram valued Eliezer, his chief administrator (Gen. 24), he yearned for a son to carry on the family line. And his nephew, Lot—with no record of appreciation for Abram saving his life—had returned to Sodom.

But our God—being the God of the impossible—reminded Abram that his son would come from his own body.

“Before, God said Abram’s seed would be as the dust of the earth. Now, He says they will be as the stars of heaven. Not only does this imply a great number, but perhaps also that the sphere of activity of the promised seed in the eternal ages will be both on earth and in heaven.” – Henry Morris

Abram’s response in Genesis 15:6 is considered by some to be the most important verse in the Old Testament: “Abram believed the LORD, and He credited [or imputed] it to him as righteousness.”

For the first time, the principle of true salvation is set forth in the Bible. The New Testament not only confirms salvation by faith, but also sets Abraham as a type of all who would be saved (Rom. 4:3; Gal. 3:6; James 2:23).

God declared Abram clean and morally right—righteous—not from his outward actions of obedience and/or works, (although these are by-products of faith), but rather on the basis of his faith.

In Noah’s case, ‘grace’ comes before ‘righteousness’; in Abram’s case, ‘faith’ comes before ‘righteousness.’ The one stresses God’s sovereignty, the other man’s responsibility. Both are true and necessary. ‘By grace are ye saved through faith. . . . For we are His workmanship, created in Christ Jesus unto good works” (Eph. 2:8, 10).  – Henry Morris, The Genesis Record

Although we don’t know the exact time Christ will return, Jesus tells us to be watchful (Matthew 24; Mark 13:32-37; Luke 21:34-38). As the pre-flood days of violence and evil foreshadowed the coming world-wide flood, so will conditions in the last days foretell an even greater destruction for those who have rejected God’s son, Jesus Christ.

What Are these Conditions?

Henry Morris summarizes some similar characteristics of the pre-flood era to conditions in these last days preceding Christ’s return:

As the flood in Noah’s day was swift and sudden, so will the return of Christ be. This should motivate us to obey Him every day. Jesus’ warns us to be ready for His return (Mt. 24).

Like Noah, are we in right standing with God?

Will Christ find faith and obedience in us when He returns?

Next week I’ll explore more of Noah’s life and why he found favor (grace) in God’s eyes.

The LORD saw how great man’s wickedness on the earth had become, and that every inclination of the thoughts of his heart was only evil all the time. The LORD was grieved that he had made man on the earth, and his heart was filled with pain.” – Genesis 6:5-6

This next section—Genesis 6-8—covers a lot of territory: the society’s degradation, Noah and the great flood, and life after the flood with Noah’s three sons.

But before we get too scholarly, let’s not miss verse 6 (above).

God grieved. His heart was filled with pain.

God has emotions like us. Or better stated: Since we are made in God’s image, we have emotions like God. Because God loves us, our attitudes and choices can either grieve Him or bring Him joy.

Precursors to the Flood

Two groups are named at the beginning of chapter 6: the sons of God and the daughters of men. The result of these two groups mixing brings an explosion of evil in the antediluvian period.

“And it came to pass, when men began to multiply on the face of the earth, and daughters were born unto them, that the sons of God saw the daughters of men that they were fair; and they took them wives of all which they chose,” Genesis 6:1-2.

This passage brings both mystery and controversial views on the “sons of God”. There are three interpretations. The first two interpretations are naturalistic, but have some gaps. The third interpretation sounds more like a scene from a Sci-Fi movie, but appears to have more backbone in biblical research.

Furthermore, Morris believes that these fallen angels (demons) likely indwelled (possessed) individuals in an organized rebellion against God. The offspring of this violation resulted in giants (Nephalim). They were people probably nine or ten feet tall. (Goliath—nine feet tall—appears in 1 Samuel 17.) The Nephilim took advantage of their height and strength by oppressing those around them.

Truthnet.org also offers insight into this view. After a short summary of Genesis 4-5, they delve into chapter 6 and show fossil and rock records. Although it’s long (as is this post) it’s also interesting. For more details, you can read Truth Net’s article here: Noah’s Ark: Genesis 6. Henry M. Morris’ book, The Genesis Record, also offers a comprehensive study for all of you scholars.

I will pick up on Jesus’ comparison of the pre-flood conditions and the last days next time. Have a great week!

One’s attitude of heart toward this matter of approaching and knowing God actually determines his destiny in eternity. . . .”  – Henry M. Morris

Adam’s first two sons, Cain and Abel, show the first great division of humanity concerning their attitude toward God. Where Adam and Eve sinned only against God, sin quickly snowballed into tragedy through their firstborn son, Cain, who sinned against both God and man.

Genesis 4:5 tells us that God rejected Cain’s offering, but accepted Abel’s. Beyond being the first shepherd, Abel is listed as the first member of the Hall of Faith in Hebrews 11. (For more on faith, see Abraham Justified By Faith, Faith Factor, Growing in Faith). Abel is also recorded as the first martyr for truth (Matthew 23:35).

Although the Bible doesn’t give specifics why God rejected Cain’s offering—fruits of the soil—both brothers knew God’s expectations. Maybe Cain resented Abel’s insistence of obeying God. (Abel was deemed the first prophet, Luke 11:49-51.) Maybe Cain determined to prove his self-sufficiency with his own produce, regardless of God’s curse from sin.

Whatever the reasons, God evaluates both the quality and motives of our offerings (Prov. 21:27). Cain’s offering failed God’s standards and specific instructions.

Instead of evaluating why God disapproved of his offering, Cain reacted in hot anger.

(This is the first time sin is mentioned in the Bible.)

God’s reply to Cain identifies his haughtiness, pride, and probable growing resentment toward his brother. Although God graciously gave Cain a second chance to right his wrong, Cain refused.

Seeds of jealousy, envy, and anger soon blossomed into hatred and eventually cold-blooded murder of his brother, Abel (Gen. 4:8).

God is patient and merciful, but He won’t always put up with sin. Although Cain stilled his brother’s prophesying voice, God’s voice had the final say: “Your brother’s blood cries out to me from the ground. Now you are under a curse and driven from the ground . . . . When you work the ground, it will no longer yield its crops for you. You will be a restless wanderer on the earth,” (Gen. 4:10-11).

(This is the first mention of blood in the Bible.)

Although God views human life as very sacred, He didn’t demand capital punishment as commanded later (Gen. 9:5). Instead, “He put a mark on Cain so that no one who found him would kill him,” (Gen. 4:15). Maybe Cain would still repent. Maybe Cain would remind others of sin’s consequence.