For Christ did not enter a man-made sanctuary that was only a copy of the true one; he entered heaven itself, now to appear for us in God’s presence. Nor did he enter heaven to offer himself again and again, the way the high priest enters the Most Holy Place every year with blood that is not his own. Then Christ would have had to suffer many times since the creation of the world. But now he has appeared once for all at the end of the ages to do away with sin by the sacrifice of himself.” –Hebrews 9:24-26

In order to set the high priest and his sons apart for service, God commanded that they participate in a public consecration ceremony that lasted a week. During this time, the priests had to remain in the tabernacle precincts. My last post summarized the first two stages of this ceremony. Below are the following five stages. 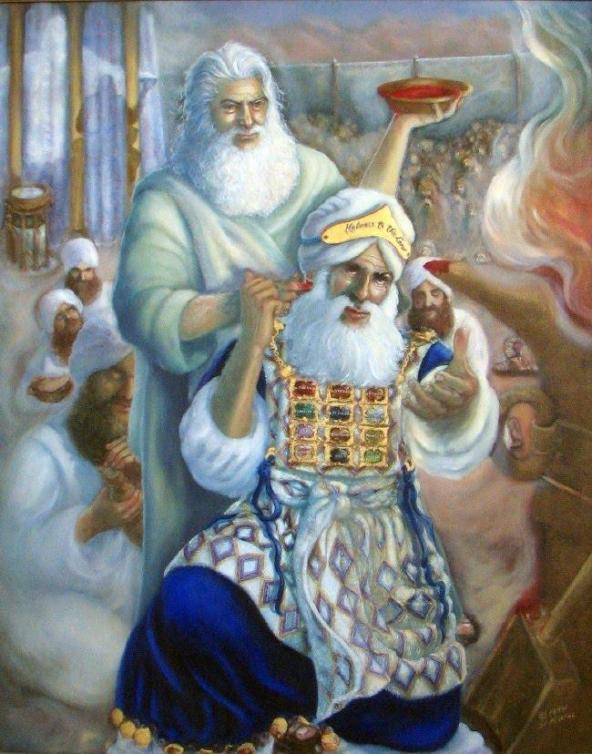 (Source: chongsoonkim.blogspot.com)
Under the new covenant, the Holy Spirit’s anointing isn’t reserved just for priests, prophets, and kings. Those who have placed their trust in Jesus as Lord and Savior have also received an anointing of God’s Spirit (1 John 2:20, 27; 2 Cor. 1:21-22). The Holy Spirit is the “down payment” of future glory. He has both anointed and sealed us by His Spirit.

Upon completion of their ordination ceremony, the priests immediately entered into ministry with no allotted vacation or sick days. Their daily, weekly, monthly, and yearly schedule were charted in the law that God gave Moses on Mount Sinai. Every day would start with sacrificing a lamb as a burnt offering. This signified the people’s total dedication to God. The day also ended with offering another lamb as a burnt offering. Wiersbe observes: “That’s a good example for us to follow, opening and closing the day with surrender to the Lord. . . . The flour and wine [given as a meal offering] represented the results of the people’s labor in the fields and the vineyards. Symbolically, they were presenting the fruit of their toil to God and thanking Him for the strength to work and for food to eat (Deut. 8:6-18). The wine poured out was a picture of their lives poured out in His service (Phil. 2:17; 2 Tim. 4:6, NIV).”

The priests’ first obligation was to minister to God. What does this mean for God’s people today? Who has been anointed with the Holy Spirit today? What is gained from this anointing? What does it mean for believers to present their bodies as a living and holy sacrifice (Rom. 12:1)?