Therefore let us stop passing judgment on one another. Instead, make up your mind not to put any stumbling block or obstacle in your brother’s way.”  – Romans 14:13

With the Roman believers in disagreement about eating meat and observance of special days, Paul laid out three principles to encourage peaceful relationships.

Principle #2: Love requires self-limitations for the sake of others 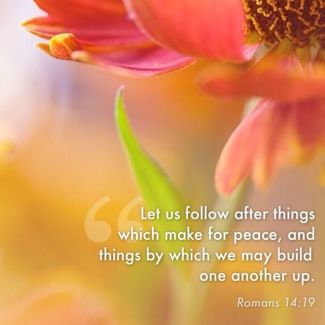 Paul directs his advice to mature believers. He warns them to beware of placing obstacles—or occasion to sin—before the weaker Christian.

Although the old rules about ceremonial foods were dismissed by Jesus (Matthew 15:10-11; 16-20), Paul addressed the issue of those who felt compelled to follow Judaism’s regulations: Anyone who violates their conscience, and doesn’t act in faith, has sinned (vs. 23).

Shepherd’s Notes comments: “God has called us to a life of faith. Trust is the willingness to put all of life before God for His approval. Any doubt about the rightness of an action removes it from the category of what is acceptable. This principle is of special help to the Christian in what is sometimes called the ‘gray area.’ If it is gray to you, it is wrong—not in itself, but in the eyes of the one who considers it inappropriate.”

Paul warned mature believers to take into account their influential actions. Those who encouraged others to violate their conscience “no longer walked in love” (vs. 15).

Although we live in a different time and culture than the early Roman Christians, we still vary in our convictions today. It’s important to continually monitor our behavior and its effects on other believers, even if we don’t feel convicted in a “gray area”. Although we don’t have to give up our freedom in Christ, if God convicts another believer differently we should avoid exercising that action in his/her presence. Mutual respect and love mark Christ’s true disciples.

What steps can believers take to ensure peace when differences arise? How does focusing our minds on Christ help promote unity?